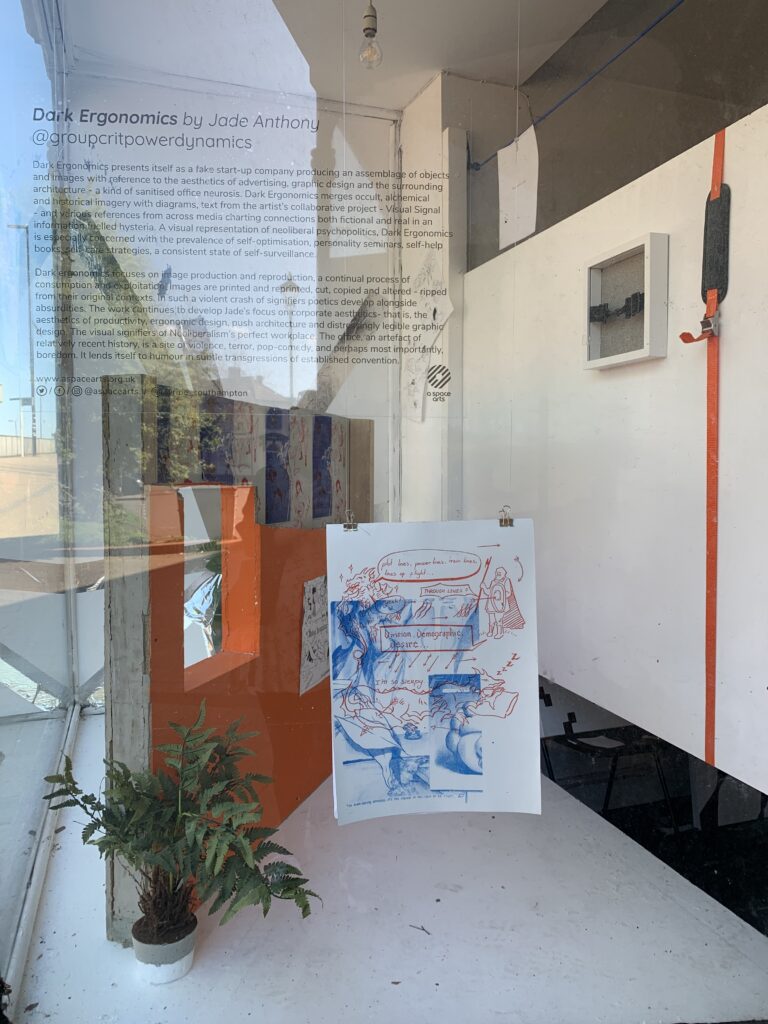 Jade’s practice is about mapping connections and the organising of visual information through drawing, film or installation. Her work focuses on developing ways to merge and blend the conventions of various visual languages to tell narratives that span across many different subjects and time periods.

“Dark Ergonomics presents itself as a fake start-up company producing an assemblage of objects and images with reference to the aesthetics of advertising, graphic design and the surrounding architecture – a kind of sanitised office neurosis. Dark Ergonomics merges occult, alchemical and historical imagery with diagrams, text from the artist’s collaborative project – Visual Signal – and various references from across media charting connections both fictional and real in an information fuelled hysteria. A visual representation of neoliberal psychopolitics, Dark Ergonomics is especially concerned with the prevalence of self-optimisation, personality seminars, self-help books, self-care strategies, a consistent state of self-surveillance.

Dark ergonomics focuses on image production and reproduction, a continual process of consumption and exploitation. Images are printed and reprinted, cut, copied and altered – ripped from their original contexts. In such a violent crash of signifiers poetics develop alongside absurdities. The work continues to develop Jade’s focus on corporate aesthetics- that is, the aesthetics of productivity, ergonomic design, push architecture and distressingly legible graphic design. The visual signifiers of Neoliberalism’s perfect workplace. The office, an artefact of relatively recent history, is a site of violence, terror, pop-comedy, and perhaps most importantly, boredom. It lends itself to humour in subtle transgressions of established convention.”